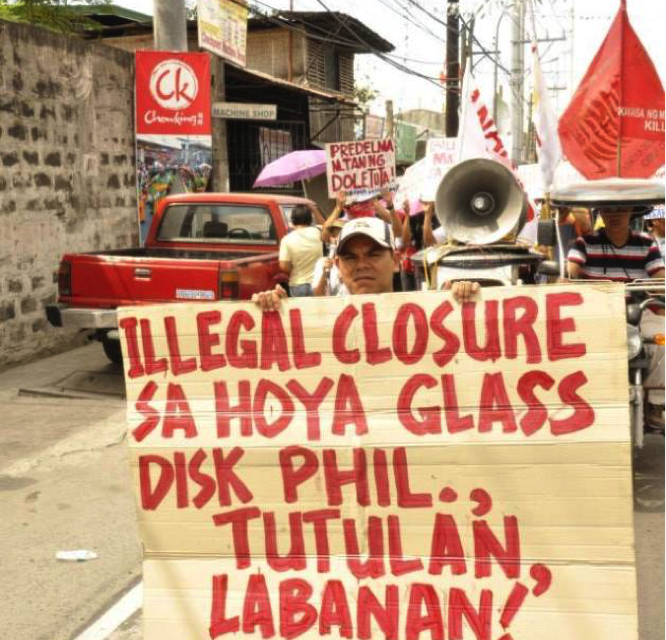 “Regular workers beware of retrenchments and mergers, It will cut you out of jobs, bust the union and contractualize labor.”

This is one of the points, the labour rights organization Center for Trade Union and Human Rights emphasized in its  assessment report of the worker situation in Aquino’s six years in office.

The group documented at least 35 major cases of retrenchment and closures due to outsourcing and union busting from the second half of 2010 up to March 2016 affecting at least 14,725 workers.

“Following retrenchment or closures where regular workers are thrown out of jobs, most companies re-open and continue  operations using contractual labor and various forms of subcontracting through manpower agencies or even home-based subcontracted jobs. In cases of mergers or acquisitions, tenured employees are often forced to retire and, or offered to be rehired as new workers  by the new management, thus losing their tenured status and many years of service,” Daisy Arago, CTUHR Executive Director said.

While this phenomenon is not totally new as it has become evident following the 2008 crisis, CTUHR underlined that the ease by which capitalists conduct their business and the legal support to expand labour flexibilization under Aquino administration has encouraged capitalists to aggressively pursue labor contracting to reap more profits but to the detriment of workers right to security of tenure and unions.

In effect, the report noted that regardless of number of years that contract workers laboured hard, there is less or nothing they can lean on for security when old age pushes them out of work.

Unlike with previous administrations, attacks against independent unions to allow contractual or flexible working arrangements have become  pervasive under Aquino. The group reported at least 44 cases of union busting, majority were done  to replace permanent and unionized workforce with subcontractors or more contractual workers. A few  cases in point  were  the closure of Mustad Terminal Tackle Inc. in Quezon city in 2010 where after forcibly accepting separation payment, the company has expanded its operation in different parts of Luzon (Bulacan and Rizal) with low-waged contractual workers. The same happened in Hoya Glass Disk in Batangas, which closed down in 2014 but is now operating with entirely new workforce. Similar tactics are reflected in the  repeated retrenchment in Asahi Flat Glass Corporation in 2015 and 2016, illegal dismissal of union officials in NXP Semiconductors in 2014, among others.

“From the onset, the Aquino administration has shown its bias against workers’ security of tenure which the DTI in 2010 said ‘need to be relaxed’ in order to attract more investors. Aquino also bolstered schemes of operations like outsourcing by ruling that the latter is a management prerogative, as in the case of Philippine Airlines in 2011. And this was further institutionalized through DOLE Department Order 18-A which provided more detailed guidelines on so-called legitimate job contracting.” Arago explained.

It is also under Aquino when enforcement of decision in favour of regularization filed and won by workers against their employers, for example as in the cases of ABS-CBN workers, GMA workers and Tanduay workers, have been outrightly ignored by capitalists and DOLE kept a cold shoulder on their enforcement  in contrast with the swift enforcement if decisions are in business favour, the group’s report added.

“Indeed, if you poke holes in the job facilitation role, a role that manpower agencies do, that Aquino’s administration took in its six years in office, it’s easy to see  jobs scarcity, insecurity and precariousness. Scarce and low quality jobs that cannot support a family decently. The workers must be very wary of candidates at different levels in the coming election  who carry the same platform and policies as the current administration pursued,” Arago said.###