The Center for Trade Union and Human Rights said that the Aquino government’s industrial peace policy have only entrenched injustice to workers and hostility to unions and actions because of the government’s preference to maintain a good business climate rather than uphold workers rights and interests.

Citing A Special Report on industrial peace and tripartite mechanisms to be released June this year, the group said that the Aquino government’s promotion, legalization, and institutionalization of compulsory arbitration and mediation mechanisms has advanced a myopic, even convoluted, concept of labor justice where “settlement” of labor-management conflict has resulted in workers having to settle with what is offered to them by the management sometimes even by the Department of Labor and Employment rather than hurdle a protracted legal battle or resort to strikes and protest.

In the last three years, strikes and lockout notices have dramatically declined from 240 in 2011 to 149 in 2013. Of these cases, an average of 78.7 percent is settled each year which the government views as an achievement in facilitating labor justice towards promoting industrial peace but whether this reflects a betterment of workers condition in the workplace is questionable at the very least, according to the group. “Rather, it may only prove that the government effectively uses its new mechanisms to tame workers’ collective action,” Arman Hernando, CTUHR coordinator for documentation said.

The group reported that in their documentation, settlements in cases of illegal dismissal due to sudden closures or union-management conflict is often reduced to money and economic settlement wherein workers are offered money or livelihood programs to keep them from holding strikes in pursuit of their right to tenure.

“The government presents these settlements, this legalized modus to keep workers from striking or protesting as a win-win solution, but in reality, the workers are always at a loss because the companies often are not held fully accountable for their violations. And while workers may receive some money, they lose their jobs and their unions,” Hernando explained.

“And when these mechanisms do not work to pacify workers actions, the Labor Secretary uses the power to assume jurisdiction to stop the strike again to the benefit of capitalists,” Hernando added.

Further, the group monitored at least 21 cases of strikes and picket protests of workers in 2012 and 2013 in contrast to the government’s record of only six strikes from 2011 to 2013. “The government is downplaying workers struggle to project that industrial peace has been attained to attract more investors. But again, low strike incidence does not at all indicate that workers no longer have concerns that merit staging a strike or protest because violations of union rights and labor standards persist.” Hernando added.

The group cited government statistics of increased labor standard violations among enterprises in the last three years from 30 percent to 42.3 percent. The group also documented 594 victims of trade union and human rights violations in 2013 alone.

The group also underscored that impunity reigned in the four years of the Aquino administration as there is still no justice for the trade unionists killed under the previous administration and killings of trade unionists continued with at least 9 victims since Aquino took office in July 2010. “Even the High Level Monitoring Body constituted by the National Tripartite Industrial Peace Council after the ILO recommendations in 2010 to investigate on these killings have only made recommendations to “close” cases or “keep investigating,” Hernando said.

Until the government reverses its framework of industrial peace that mainly protects business interest over workers rights, then there can be justice in such policy, the group said. The group also vowed to join the Labor Day protest tomorrow to press the government to stop trade union repression and human rights violations, call for justice for victims of past violations and to support workers demands for better wages and secure jobs.### 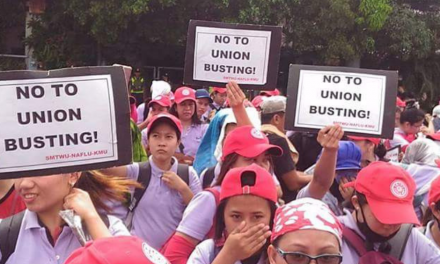