The Center for Trade Union and Human Rights (CTUHR) joins all labor groups and rights defenders in welcoming  the upcoming International Labor Organization High-Level Tripartite Mission (ILO-HLTM) to the Philippines this January 23-27, 2023. CTUHR lauds the workers and organizations who fought hard to pressure the PH government to accept the ILO-HLTM.

“It is high time that the violations against workers’ rights in the country be tackled and investigated by the ILO, a UN special body that sets international labor standards including freedom of association. Philippines is a signatory to ILO conventions like freedom of association (C87) since 1953  and obliged to implement them in law and practice. But violations have been rampant and alarming for the past years, especially under the Duterte administration and continues under Marcos Jr.,“ Daisy Arago, CTUHR Executive Director said.

Workers barely survive the precarious working conditions and wage injustice, as the government and employers fail to address their demands for job security and living wages. When they exercise their right to freedom of association, workers often face multiple barriers – from fear of losing their jobs to the risk of being tagged as a terrorist targeted to be arrested and detained or worst, killed.

As a labor rights NGO, CTUHR witnessed how workers beset by skyrocketing prices of commodities and utilities fear of losing jobs  uns.afe working conditions, dipping low wages and  utter disregard of the right to organize and right to express their opinion keep worrying them. We are  not surprised if Workers Rights Index  puts PH d on the Top 10 Most Dangerous Countries for Workers in the last five years.

Fifty-six (56) workers, unionists and organizers have been killed under the Duterte administration; none has been served justice. Among them were agricultural workers from Negros, transport leaders, informal workers, urban poor leaders like Carlito Badion and labor leaders like Emmanuel Asuncion, Dennis Sequena and Dandy Miguel.

Meanwhile, the creation of the National Task Force to End Local Communist Armed Conflict (NTF-ELCAC) signaled more attacks against workers, especially those fighting for their demands and exercising their freedom of association. At least thirty (30) local unions have been under attack since its creation, as they hound officers and members in their communities and harass them to disaffiliate.

Union organizers are also subjected to enforced disappearance such as what happened to Ador Juat and Loi Magbanua last May 2022. This scheme is apparently being continued under Marcos Jr. Two labor organizers in Cebu suffered the same fate. Dyan and Armand were abducted last January 8, 2023. Few days after, a video of their abduction was posted on social media, prompting their captors to release them.

“We hope that the ILO HLTM, despite its limited time to hear the stories of workers and unionists, could see the gravity of the challenges workers are facing amidst attacks from all fronts. With optimism, we look forward that the mission be instrumental in our quest for justice for all victims of trade union repression and in our clamor to junk policies that perpetuate impunity. May the workers be truly treated with dignity and respect,” CTUHR ended. 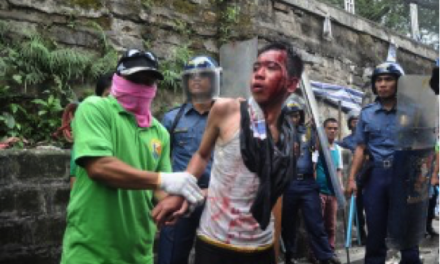