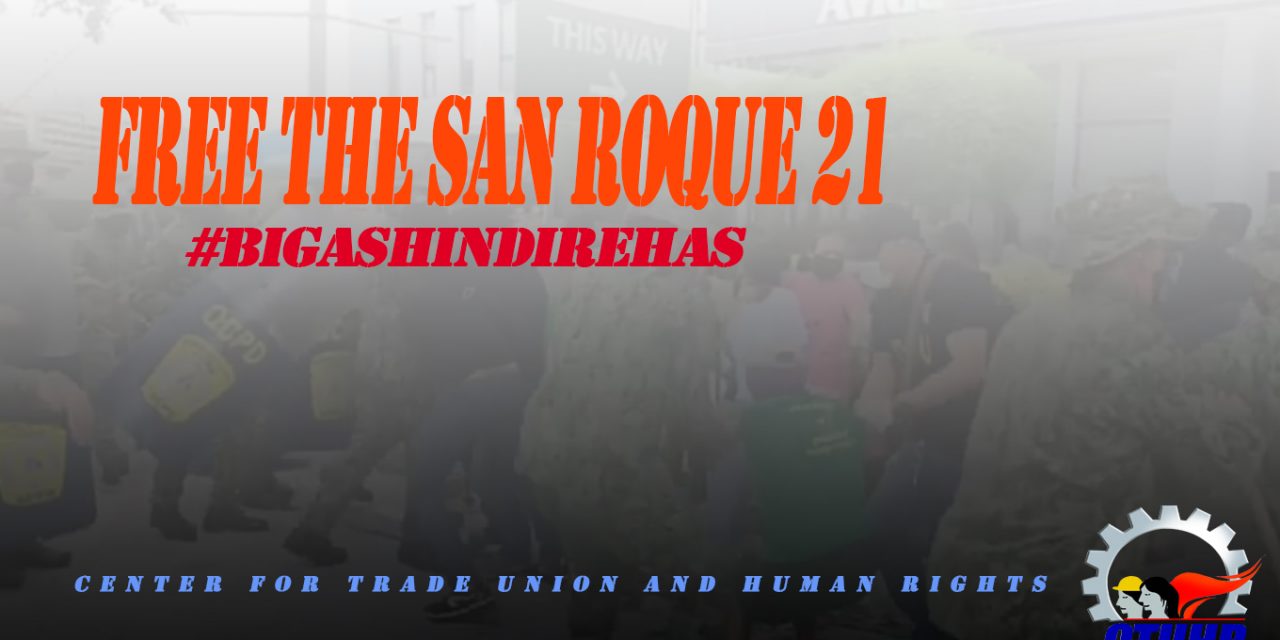 “We are calling for the immediate and unconditional release of the #SanRoque21. Their grievance for food and aid is legitimate, just and should be immediately addressed. The Duterte administration should see the spontaneous protest for what it really is, not an attempt to destabilize or defy the government or a simple show of Filipinos’ ‘katigasan ng ulo. It is a desperate call for help, an expression of their growing hunger and a courageous act of demanding for what is due them,” said Daisy Arago, CTUHR Executive Director.

On April 1, 2020, around 200 residents of the vast urban poor community in North Triangle, Quezon City collectively violated the community quarantine and took their demands for food and assistance along EDSA. Residents complained that they haven’t received any assistance since the lockdown was implemented last March 15. Elements of the Quezon City Police District (QCPD) were quick to respond and arrested 21 of them, whom they considered as troublemakers.

The Center for Trade Union and Human Rights (CTUHR) condemns the violent dispersal, arrest and continued detention of 21 urban poor residents and says that now is the best time for government to show understanding and compassion.

Arago further avers that the protest bares the incompetence and the lack of plans by the government on how the poor, who are the most affected with the implementation of an Enhanced Community Quarantine (ECQ) against COVID-19 can be provided immediate and sufficient assistance so they don’t risk going out to find a living.

“Again, we appeal to the Quezon City government and the national government for compassion instead of detention for the poor. Release the SanRoque21! It is the best gesture to have cooperation in our unified battle against Covid-19. What the people need right now, in this time of crisis, is a government with a heart,” Arago added.

As of writing, the 21 urban poor residents are still detained at Camp Karingal and early intervention of the government for their release is imperative. The QCPD says it is determined to press charges for violation of RA 11469 (Bayanihan To Heal as One Act) and Resistance and Disobedience to a Person in Authority. Meanwhile, reports today reveal that the residents of Sitio San Roque finally received food packs from authorities.

It has been three weeks since Duterte placed Luzon and other parts of the country under ECQ yet other areas have not received any food aid. Emergency powers were swiftly granted to Pres. Duterte by the Congress, through the “Bayanihan To Heal as One Act” giving him complete access to P275 billion. A National Action Plan was launched, headed by present and ex-military generals, instead of public health experts. It is the civil society and compassionate individuals and organizations who are filling in to address the needs of the vulnerable sectors and frontliners through various fundraising and donation drives.

Three weeks into ECQ and the people has yet to see concrete plans and a sense of urgency from the government, as the number of deaths and infected continue to spike. Aside from the dangers and fear posed by the pandemic, the people continue to suffer from hunger and desperation. Some local government units and government agencies have distributed cash assistance and food packs but they barely suffice to the needs of millions of workers who lost their source of living.

“This is a health crisis. A militaristic approach, with arbitrary arrests and threats, will not solve the current crisis. The reality is that people are more afraid of dying from hunger than dying from the disease. Duterte’s threats to ‘shoot them dead’ only aggravates their suffering.” Arago ended.###