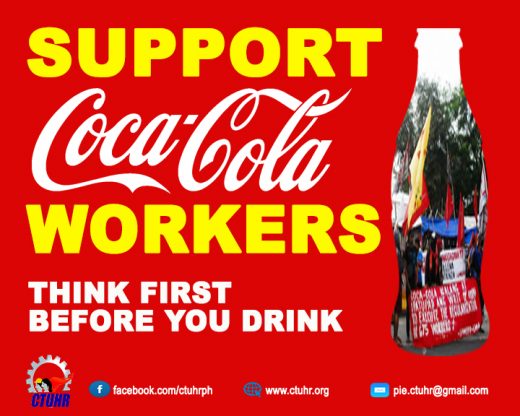 “When aggrieved workers have found recourse in law to get regular employment denied them by company squeezing them for decades, and corporations violate the law, it is a legitimate right of every worker to strike, says the Center for Trade Union and Human Rights in lending its solidarity and support for the striking workers of Coca-Cola FEMSA Philippines. Inc. (CCFPI) Sta. Rosa Plant in Laguna.

“This brazen refusal of CCFPI management to regularize its 675 workers despite DOLE’s order is an affront to Philippine laws and labour justice and a gross disrespect to international labour standards. For years, CCFPI has amassed billions of pesos from denying long-term contractual workers of regular status that could have given them benefits and better wages. It has employed various schemes such as mass-layoff, illegal retrenchment and “restructuring” to escape from the responsibility of regularizing workers after more than six months, then hand them over to the manpower agencies,” Daisy Arago, CTUHR Executive Director, said.

“How can a government department enforce its decision over an arrogant capitalists like Coca-Cola, when President Duterte himself fails to fulfill his promise to end contractualization? He enticed the workers and labour centers hanging on his promise to sign the Executive Order to end to all forms of contractualization and dropped them flat, by saying endo cannot be stopped. The pro-capitalist and anti-worker character of this administration favors the already big capitalists as they continue to exploit their workers while ignoring labour laws and standards,” Arago said.

The labour rights NGO also slammed the silence of Labor Secretary Silvestre Bello on the issue of the contractual workers of Coca-Cola. The group warned the Coca-Cola striking workers on a possible move by Sec. Bello reversing DOLE itself decision similar to what he did when he overturned the DOLE-Region 4’s decision ordering the Alaska Milk Corp to regularize 800 workers.

Coca-Cola FEMSA, together with local government, deployed 100 security personnel, armed police and SWAT around the vicinity of the picketline, seemingly prepared to inflict violence on striking workers on a whip of an order. “Government forces seem always ready to defend corporations against its own people fighting to making a living. Is this is not fascism and state terrorism? This is really disturbing”, CTUHR enthused.

CTUHR appeals on the public, Coke product consumers and other labor groups to support the strike of the 675 workers of Coca-Cola. Can you feel happiness when people who make the products you drink are kicked out of jobs to take in much-lower paid workers? Think first before you drink?#