The group noted two forms of criminalization against workers and unionists: one is when workers are charged by capitalists with criminal offenses whenever the worker/s filed complaints against the former’s non-compliance with legal standards or when the union is in conflict with the management; the other type of criminalization is perpetrated by state agents reportedly by the military wherein union leaders of militant labor centers are maliciously linked to operations of armed groups particularly the New People’s Army.

Arman Hernando, CTUHR coordinator for documentation expressed alarm over this heightening spate of criminalization and said that it undermines workers right to unionize and jeopardizes the very few mechanisms where workers can seek redress when in conflict with their employers.

The group also pointed to the state’s counter insurgency program, Oplan Bayanihan, as culprit to most of these “legal offensives” and violations of workers’ freedom to unionize. “Like the previous administration, the Aquino administration and the military continue to malign legitimate people’s organizations and unions by linking them with the NPAs. And same with, if not worse than, past counterinsurgency programs, Oplan Bayanihan has resulted to volumes of human rights violations including these harassments through filing of trumped up cases, extrajudicial killings and others,” Hernando added.

Late last year, leaders of militant unions, Roy Velez and Amelita Gamara of Kilusang Mayo Uno and Randy Vegas and Raul Camposano of Confederation for Unity, Recognition and Advancement of Government Employees (COURAGE) were charged with murder linked to two separate NPA operations in Ifugao and Daet, Camarines Norte. Vegas and Camposano were first abducted reportedly by military agents on December 3, 2012 and this was followed by malicious filing of criminal charges.

The group challenged the Aquino government to comply with the ILO recommendations to uphold workers’ freedom of association and drop criminal charges against workers exercising their right to unionize and strike. In 2010, the International Labor Organization (ILO) released its recommendations to the Philippine Government following the ILO High Level Mission that investigated the spate of human rights violations against unions and workers.### 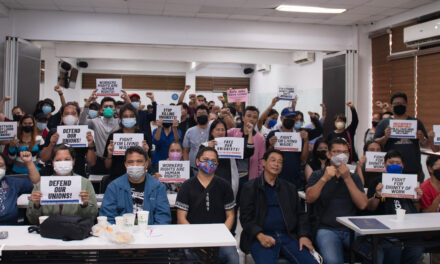 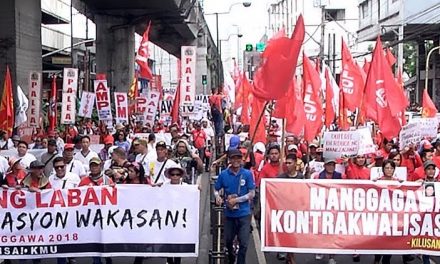