Amidst the pandemic and the worst global economic crisis, the plight of the workers continues to worsen and is further aggravated by intensified repression and attacks against trade union and human rights.

The past year marked an alarming escalation in the human rights crisis in the country. The Filipino working class bore the brunt of most of the human rights violations that range from excessive punitive actions against quarantine violators; abuse of police and military power in the duration of the lockdown; illegal arrest of protesters, relief volunteers and even those who are simply asking for relief goods; brutal raids using fake search warrants, planting of evidence and filing of trumped up charges; to bloody murders.

Since the Duterte regime formally ended its peace talks with the Communist Party of the Philippines (CPP) in 2017, it has launched an all-out war not just against armed combatants, but all activists and critics. Duterte issued Executive Order No. 70 which institutionalized a “whole-of-nation” approach in its counter-insurgency program to be implemented by a National Task Force to End Local Communist Armed Conflict (NTF-ELCAC).

In 2020, NTF-ELCAC received a whopping budget of Php36.439B from its member agencies, which they maximized to intensify red-tagging, fake news-peddling, black propaganda and vilification, surveillance and harassment and intimidation against activists, rights defenders and critics. The restrictions and the militarist lockdown imposed during the pandemic was also maximized in intensifying these attacks. In 2021, despite the need for more budget allocation for pandemic response and to boost economic growth, the task force was still allotted with a huge budget of Php19 billion.

The anti-democratic Anti-Terrorism Act of 2020 was also railroaded and passed into law in the middle of the pandemic. This controversial law received an overwhelming opposition and dissent from various sectors. Since its inception and passage in July 2020, rights groups have been up in arms about what they see as draconian provisions and intentions. A total of 37 petitions against it were filed at the Supreme Court.

According to human rights alliance, Karapatan, politically-motivated extrajudicial killings in the country has reached 353 (as of December 10, 2020).

2020 ended with big blows for the labor movement and rights defenders. On the International Human Rights Day, seven (7) activists were arrested in simultaneous police operations. They are collectively known as the HRDay7. Six of them are labor rights organizers. Five (5) of the HRDay7 are still behind bars under trumped-up charges. Journalist Lady Ann Salem and labor organizer Rodrigo Esparago were released last March 5 after the Court found the allegations against them lacking merit.

Two bloody massacres also happened in December – the first is the Baras Massacre in Baras, Rizal, where five (5) mango farmworkers were killed, as they are accused of being rebels; and the other is the Tumandok Massacre in Panay, which cost the lives of nine (9) Tumandok leaders and seventeen (17) others were arrested under trumped[1]up charges.

The first quarter of 2021 is not over, and yet the attacks against rights defenders have further intensified. There are no signs that these attacks will stop or even lessen, anytime soon.

“I’ve told the military and the police, that if they find themselves in an armed encounter with the communist rebels, kill them, make sure you really kill them, and finish them off if they are alive… Forget about human rights. That’s my order. I’m willing to go to jail, that’s not a problem.”

This was quoted directly from President Duterte in a briefing in Davao, two (2) days before the Bloody Sunday Massacre that transpired on March 7, 2021 in different provinces in the Southern Tagalog region. State forces conducted tokhang-style raids, weaponized by search warrants, resulted to the death of nine (9) rights defenders in four provinces (Laguna, Rizal, Cavite and Batangas) and the illegal arrest of four (4) more. The state forces justify these atrocities with their old narrative that the victims killed, resisted (“nanlaban”) and that the victims possess illegal firearms/explosives. But witnesses, fellow rights defenders and families say otherwise and assert that these are all part of the Duterte government’s brutal war against critics and activists.

One of the 9 killed is Emmanuel “Manny” Asuncion, a long-time unionist and labor organizer and current Spokesperson of Bagong Alyansang Makabayan (BAYAN) – Cavite. In 2001, he worked in one of the companies located in the Cavite Export Processing Zone (CEPZ). He experienced maltreatment and abuses as a worker which triggered him to lead fellow workers to file complaints against the company. He was eventually dismissed from his work and opted to pursue organizing fellow workers in different parts of the province. He became a volunteer of the Workers’ Assistance Center (WAC) and became the Chairperson of the Solidarity of Cavite Workers (SCW).

His organizing work was extended to working with other sectors when he joined BAYAN-Cavite. He assisted various urban poor and peasant communities in Cavite that faced threats of demolition and land-grabbing. Throughout the course of his work, he has been harassed and threatened many times, as attempts to make him stop his advocacies, but he persevered.

Meanwhile, three (3) unionists were among those arrested during the Bloody Sunday incident – Esteban “Steve” Mendoza, Elizabeth “Mags” Camoral and Eugene Eugenio. Steve is the Executive Vice President and Paralegal of Organized labor OLALIA-Kilusang Mayo Uno; Camoral is the former President of the workers’ union in F-Tech Inc. located in Binan, Laguna; and Eugene Eugenio is a member of the Confederation for Unity, Recognition and Advancement of Government Employees (COURAGE) and a former employee of Antipolo City Hall.

The fourth activist arrested is Nimfa Lanzanas, a Karapatan paralegal to political prisoners. Police claim that there are a total of 6 arrested and they claim that 9 still remain “at-large.” Rights groups have yet to identify the other 2 arrested.

Just a few hours after the incidents, state forces even have the audacity to brag about this operations through a press release, saying that the Philippine National Police (PNP) in CALABARZON (Cavite, Laguna, Batangas, Rizal and Quezon) region “scored big time during the Simultaneous Implementation of Search Warrants” against alleged communists who are in possession of firearms and explosives. The police added that these operations which they have called COPLAN ASVAL was a “collaborative effort” with the Regional TF-ELCAC.

To add more injury and to perhaps stall investigation and autopsy, state forces gave the families a hard time finding and claiming the bodies of the victims with unnecessary paperworks and harassment from military and police.

Three (3) days before the Bloody Sunday Massacre, on March 4, 2021, two (2) other unionists – Ramir Corcolon and Arnedo Lagunias – were arrested in separate incidents in Laguna, still under the same state-perpetrated modus. Lagunias is a former union officer of Lakas Manggagawang Nagkakaisa sa Honda (LMNH-NAFLU-KMU) and Alyansa ng Manggagawa sa Engklabo (Alliance of Workers in Enclaves), while Corcolon is the Secretary General of Water System Employees Response (WATER) and a National Council member of the group COURAGE.

In February this year, Dutch lay missionary and labor rights advocate Otto de Vries received an Order to Leave and cancellation of his VISA from the Bureau of Immigrations. The letter given to him said that the order was prompted by information from the National Intelligence Coordinating Agency (NICA) that Otto has been participating activities of CTG fronts and affiliates, including KMU and the Ecumenical Institute for Labor Education and Research (EILER). Otto is currently a volunteer researcher of EILER, which is celebrating this year, its 40th year serving the workers through education and research.

For the past few weeks, the Center for Trade Union and Human Rights (CTUHR) has been receiving more reports of unionists and labor organizers being targeted with surveillance, red-tagging, harassment and intimidation. Union leaders and members of Wyeth Philippines, Nexperia Philippines Inc. and Optodev Inc., which are located in special economic zones in Laguna, were visited by agents of the NTF-ELCAC in their homes and were subjected to interrogation, red-tagging and harassment. These agents explicitly accuse them that their union is part of a Communist-Terrorist Group (CTG), thereby posing direct threats to their live

All these incidents in the past few weeks, add to the long list of violations against trade union and human rights in the country. According to the documentation of CTUHR, the number of state-sponsored killings among workers and labor rights defenders has reached 53. Meanwhile, 30 unionists and labor rights advocates remain detained under trumped up charges in different parts of the country.

Amid these challenging and dangerous times, workers, despite the threats not only to their jobs but more so to their lives, persevere in forging unities to strengthen calls for decent work, living wage, health and safety at work, government assistance for those who lost jobs, freedom of association, effective pandemic response and respect for trade union and human rights. 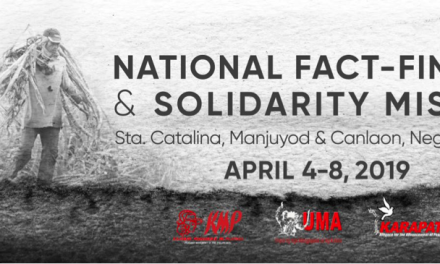