The Center for Trade Union and Human Rights reported of rampant union rights violations within the first half of Aquino’s presidency. The group cited 132 documented cases of violations to workers right to freely organize that victimized over 20,000 workers and other forms of human rights violations.

Violations of workers’ freedom to organize (also referred to as freedom of association or FOA) documented by CTUHR include non-recognition of unions, union busting, harassment of unionists inside the workplace, intervention on trade union affairs, anti-union discrimination and prohibition of the right to strike.

Forty-two (42) other cases of violations of collective bargaining agreements (CBA) and other CBA issues affecting over 11,000 workers were documented within the last three years since Aquino took office.

“The government boasts of achieving industrial peace and almost zero-strike incidence but this is casinoscapital.com not at all indicative of better conditions for unions and workers. The numerous cases of union rights violations and CBA issues is clear proof that conditions for union organizing has not improved at all,”  Arman Hernando, CTUHR coordinator for documentation said.

Aside from these, CTUHR also documented over 84 cases of civil and political rights violations against workers and unionists which include cases of extrajudicial killings, arbitrary arrests, harassment, physical assault and filing of false criminal charges.

The group described the number of unionized workers as “alarmingly low” covering less than 10% of wage and salary workers. Recent data on CBAs from the Bureau of Labor and Employment Statistics (BLES) also revealed that in 2011, only 326 CBAs are registered nationwide covering only 66,485 workers.

“This miniscule percentage of unionized and CBA-covered workers in addition to the persistence of union rights violations shows how terrible labor rights situation in the country is today. While the Aquino government is hell-bent in selling out the country to investors on one hand, it miserably fails to protect the rights of the majority who create the nation’s wealth on the other hand.”

“The right to form unions and collectively bargain is the very important to workers for it is the only means by which workers can empower themselves and claim their rights even at the factory level,” Hernando averred.

The group added that continued attacks by capitalists and state agents on workers who struggle to form organizations and unions contribute to this ever decreasing rate of unionized workers. Government policies that allow contractual labor also undermine workers right to organize.

“The Aquino government must be reminded that a truly developed society can only be achieved if its people are enjoying their rights. Economic growth or so-called ‘inclusive growth’ is meaningless and hollow if majority of the people are not empowered to claim their rights and do not feel the fruits of development,” Hernando added.### 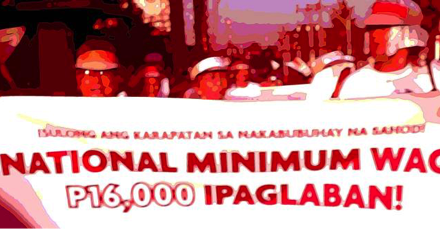 ‘No Vaccine, No Work policy,’ Discriminatory and Tantamount to Illegal Dismissal