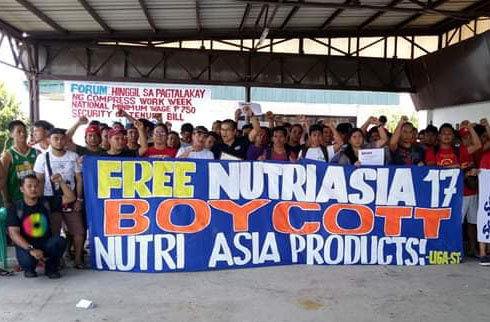 The Center for Trade Union and Human Rights (CTUHR) seeks for your solidarity and support in calling for the immediate and unconditional release of 17 workers of local condiment company, NutriAsia Inc. arrested and detained more than a month ago.

More than a year after the workers’ strike in Nutri Asia-Marilao, Bulacan,  the workers of NutriAsia in Light Industry and Science Park (LISP), Cabuyao, Laguna, led by KASAPINA-OLALIA-KMU, also launched a strike on July 6, 2019, at around 5:00 in the morning. Workers complained against the following unfair labor practices of the company: (1) labor-only contracting, (2) illegal deduction of wages, (3) forced overtime, (4) underpayment of overtime pay and (5) harassment and fabrication of cases filed versus especially union members.

The strike came two (2) years after the Department of Labor and Employment Region IV A  (DOLE IV-A) issued a decision in 2017 ordering NutriAsia to recognize as regular employees the 714 contractual workers at the time employed by ANR, B-Mirk at Serbiz agencies.  The latter, according to the Order are engaged in prohibited practice of Labor Only Contracting (LOC), thus, the workers they hired and deployed in NutriAsia are deemed to be regular workers of NutriAsia. NutriAsia and its strings of manpower agencies however, defied the order and workers remained contractual.

Few hours after the strike commenced on July 6, at about 9:30am, while they were cooking breakfast, combined forces of Philippine National Police (PNP) Laguna, NutriaAsia security guards and hired goons attacked the strikers. The goons and security guards used a bulldozer to forcibly open the gate of the plant and threw stones against the workers who held their strike inside the plant. The police, headed by PNP- Laguna Chief Colonel Eleazar Mata and PNP Cabuyao OIC Zeric Soriano, used their batons and shields against the workers. In the middle of the commotion, the police arrested 17 striking workers (14 male, 3 female) were taken.  There were also reports of sexual harassment, wherein some of the arresting cops and security guards touched the breasts of an arrested woman striker. The violent dispersal also left scores of workers injured.

All the 17 arrested striking workers of Nutriasia were brought to Cabuyao police station and were later charged with Arson,Serious and Slight Illegal Detention, Malicious Mischief, Robbery, Grave Coercion and Theft following complaints filed by police and company guards.

The arrested workers are the following:

A week later, they were transferred, even without court order to the Provincial Jail under the Bureau of Jail Management Penology. Circular No.15 series of 1982 Circular No 9 of 1982 enjoin government prosecutors to first secure clearance from DOLE and/or office of the President before taking cognizance of complaints for preliminary investigations and filing in the court of corresponding information of cases arising out of or related to a labor dispute.

This law was not observed in the case of the NutriAsia17 and still violated after nearly two months in jail. At the hearing, the judge recommended more than P700,000 (US$13,592) bail for their temporary liberty. The union however, is unable to pay.

It could be recalled that the workers in the NutriAsia plant in Marilao, Bulacan also faced similar incidents last 2018. They launched a strike due to same demands and complaints and were confronted with violence, harassment and illegal arrests. More than a year later, those issues have not been resolved, workers lost their jobs and NutriAsia and its owner, Joselito D. Campos, Jr.have not been held accountable for their labor and human rights violations.

Mr. Campos is an Executive Director of Del Monte Pacific Ltd. and the Vice Chairman of Del Monte Foods, Inc, Del Monte Pacific Ltd US subsidiary.He is also a Director of Field Fresh Foods Private Ltd., a joint venture of the Company with the Bharti Group of India. He was the former Chairman and CEO of United Laboratories, Inc. and its regional subsidiaries and affiliates. Unilab is the Philippines’ largest pharmaceutical company with substantial operations in the Asian region.

NutriAsia Incorporated prides itself for being the leading producer and distributor of sauces and condiments in the country. After all it has done to its workers to whom it owes its success, it is now known to Filipinos and the international community as a notorious labor and human rights violator that commits violations with impunity. It should be held accountable at the soonest possible time.

Please support the workers and the union in calling the attention of NutriAsia Inc. and Philippine Department of Labor and Employment (DOLE) and the PNP Laguna to demand the following:

Please send a copy of your solidarity statements and letters to ctuhr.pie@gmail.com.

Thank you very much for your support and solidarity!